Previous Isotachophoresis Simplified Next
Our product, the Ionic™ Purification System, employs an innovative separation technology based on the principles of isotachophoresis (ITP), a form of electrophoresis that separates and concentrates ionic analytes of interest.
Randy Dyer on May 15, 2020 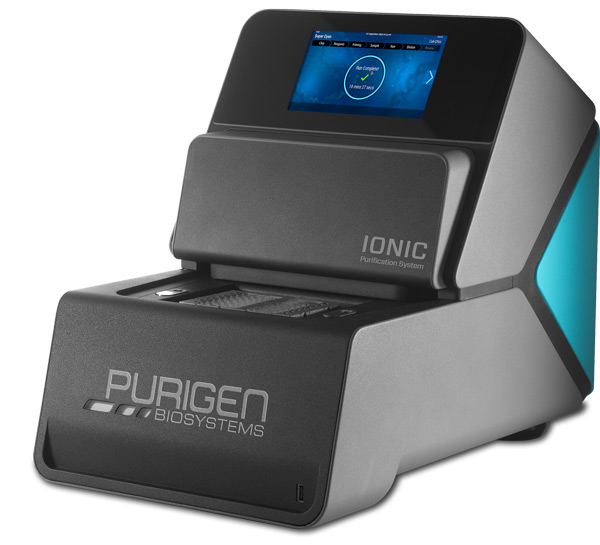 
How is ITP used on the Ionic system?

To implement ITP on the Ionic system, we use a fluidic chip composed of 8 independent channels that are each connected to a series of wells that open to the surface of the chip. The figure below is a conceptual representation the separation process that occurs within each channel. An animated video representation can be found here.

Prior to starting a run on the Ionic system, two primary buffers are loaded into separate wells. The first, shown in red above, contains a high concentration of “trailing” ions that have a slightly slower electrophoretic mobility than the nucleic acid, and the second, shown in blue above, contains a high concentration of “leading” ions that have an electrophoretic mobility faster than nucleic acid. In a priming step, the buffer in these wells moves into the fluidic channel filling it completely. Sample lysate is then loaded into another well of the chip that feeds into the same channel between the trailing and leading ion buffers. 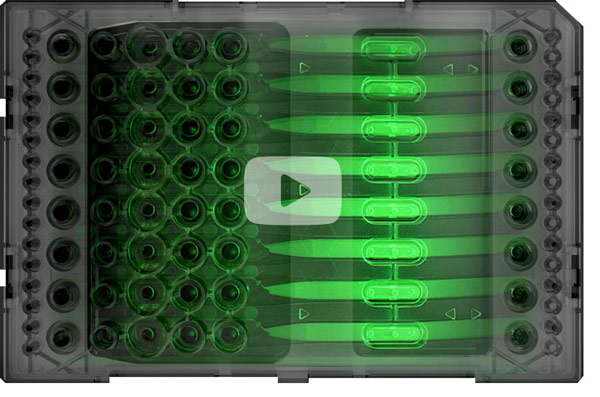 The tight band of nucleic acid eventually passes into a well where it can be collected. Using a sensor built into the instrument, the current is turned off once the nucleic acid enters this well. At that point, pure nucleic acid can be aspirated from the well using a standard laboratory pipette.

Since the separation occurs in a free solution, there is minimal shear force that can damage or fragment the nucleic acid. Furthermore, all nucleic acid present in the lysate is separated and collected regardless of fragment length or sequence. This results in an unbiased extraction and purification of nucleic acid with higher purity and yield than most conventional purification methods.


Where can I find more info?

For a deeper understanding of isotachophoresis, we recommend these publications from Purigen Biosystems’ co-founder and Stanford University professor, Juan Santiago: